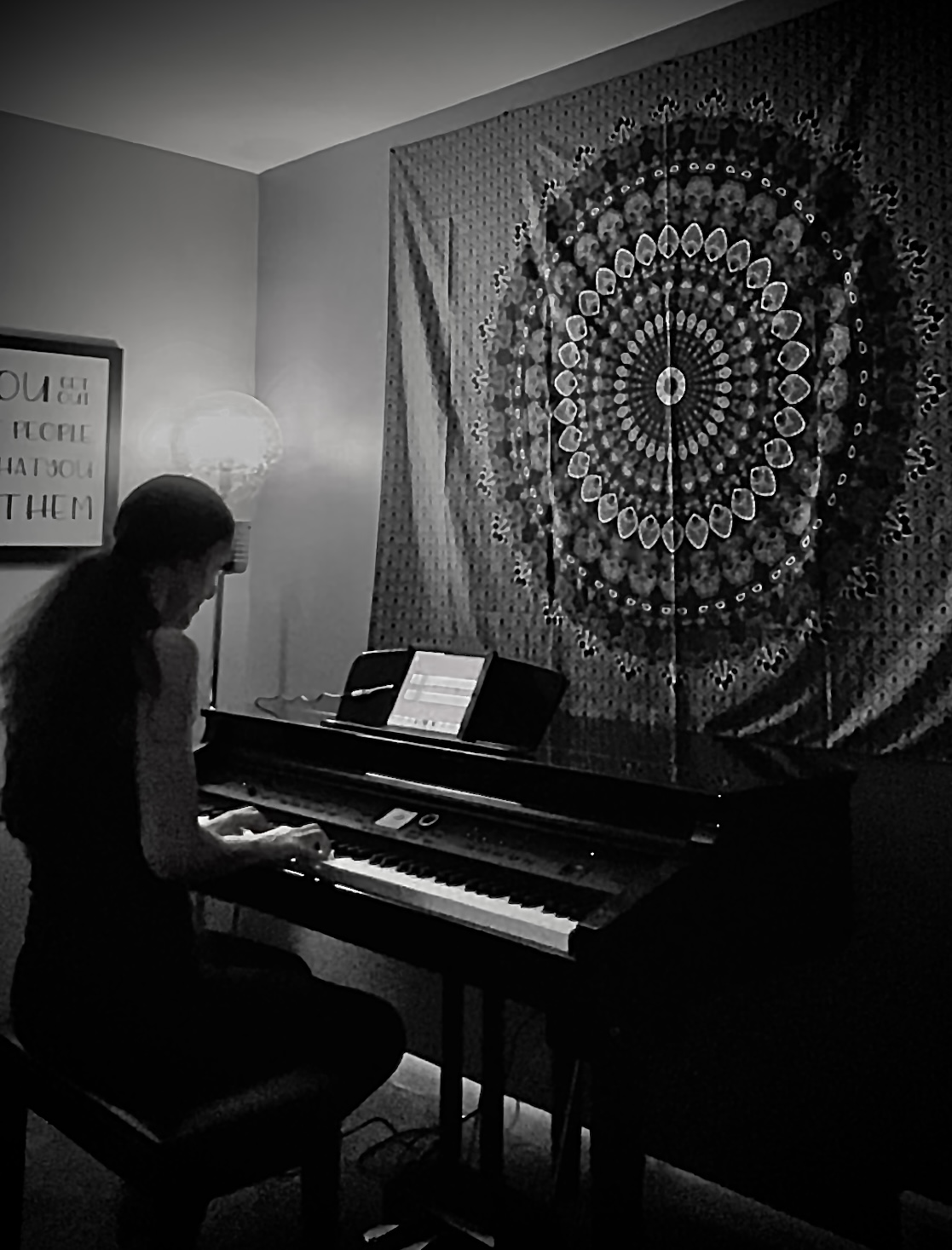 My music playing journey has been interesting, to say the least. Ken has tried for years and years to get me attached to an instrument and we have had many failed attempts. The first (yes, there are several) instrument he bought for me was an acoustic guitar – a righty. I think it is important to note that I am left-handed – VERY left-handed. I thought if I learned how to play right-handed, I would just play right-handed as a left-handed person, and it would be easier for Ken to teach me. That did not last long. That acoustic sits in the basement in the ‘museum’ part of the instrument collection.

Next came the electric guitar – a lefty (because we learned our lesson with the right-handed acoustic). It was a little challenging for Ken to teach me, but he got the hang of it and soon enough I was playing the intro of Iron Maiden’s The Trooper as well as the beginning of Fade to Black by Metallica. It did not stick though. The guitar just did not feel right to me. The movements were awkward and uncomfortable, and it became a chore for me to even pick it up. The electric guitar is now part of the museum display in the basement.

Yes, there is more.

Next came the bass – a lefty (we totally gave up on me doing anything right-handed, solid decision). The bass, up until my next and last instrument, was my favorite. I really tried with the bass. I watched lessons online. I practiced finger work and watched technique videos. Ken found a program that I could learn and practice songs on my own, which was cool because I am fiercely independent (to a fault). I learned Salt-N-Pepa’s Push It and Michael Jackson’s Beat It. I was humming along with the bass, and then again, I found myself hitting a wall. It started feeling like a chore, and when I realized I would rather do the dishes over practicing, I knew we had fallen flat again. You guessed it; the bass is now part of the museum display in the basement.

What came next surprised me. I had pretty much given up on instruments. I told Ken I did not have it in me, it just was not meant to be. I went back to focusing on the show and cheerleading him through learning bass. He randomly picked up this cheap midi keyboard to play around with and perhaps do some recording. I tried it out one day, just goofing around, and for the first time on this journey, an instrument felt natural and made sense.

I took a keyboard class back in high school, and it is not what you are thinking. It was a typing class. The class was a joke to me; we did not even have internet at home at the time (sheesh, that makes me feel old!). By the end of the semester, it was my favorite class, I was acing typing tests, the teacher became my favorite, and she even scored me a co-op job at an office doing clerical work, which got me out of school early every day.

I was able to see and feel a correlation between typing and Ken’s keyboard, and it gave me the confidence I needed (for the first time, really). I felt like I had a bit of a head start. I mentioned I am fiercely independent, and my keyboard-turned-piano journey is no different. Instead of relying on Ken to teach me songs, I started looking at apps. I came across Simply Piano, which provided a free seven-day trial, and then it was pricey for a one-year subscription. I decided to sign up for the trial, and within four days I was playing several songs, very dumbed down, obviously.

It quickly became apparent to Ken and me that we found an instrument (by accident) that I finally genuinely enjoyed, but playing on a tiny, cheap midi keyboard was not going to cut it. About two months later, I made a huge decision and ordered a baby grand electronic piano – my covid crisis purchase.

As a result of the piano purchase, Ken bought me the one-year Simply Piano subscription for my birthday. I am going on week seventy-one of consistent piano playing, although I wish I had more time to dedicate to practice. The app is awesome, and if anyone is considering learning the piano, it is a great start and surprisingly motivating. I can play ~100 songs (parts of songs, simple versions of songs, and more complex); Lady Gaga, Billie Eilish, Queen, Blondie, Adele, Alicia Keys, Ruth B, ABBA, John Legend, Ozzy, the list goes on. I am having a blast, and it is another great distraction from my anxiety. The app also provides a crash course in music theory, which is exactly what I needed to not be overwhelmed with it. Ken and I usually spend Friday and Saturday nights on YouTube watching music theory videos now. Riveting.

I have always loved and admired music and musicians, but now, I have an entirely new appreciation. I was shocked and appalled to discover if I did not practice a song for one day, I would practically play it like I had never learned it. I had many meltdowns until I realized how important every day practice is, especially when I am learning a new song. Let’s just say Ken is the best cheerleader a gal could have. He has been patient, supportive, encouraging, and really pushes me. Lesson learned for me; even if I do not have time to learn, practice can be about simply maintaining what I already know, and it is crucial for progress and success.

Ken has band practice twice a week, and I usually crank Ebony (the name for my piano, pronounced ē-bone-ē, thanks to Adam Frappolli – one of my favorite stories) and put on a one-person concert for myself. I have a blast. It is cathartic for me; playing breaks me from doom-scrolling on the internet, I often have moments of reflection, my confidence has increased a bit, and I figured out a way to move along at my own pace without needing anyone else.

Here is where the story fits into the show. On Ken’s bucket list, up at the very top, is him and I recording music together. I get excited thinking about it too. So, we have an idea, and we would like your participation (Erin, you too!). We want to do collaborations with anybody and everybody that wants to participate. There is only one rule – don’t be an asshole. We want to stick to cover songs, and not just metal. We have kicked around ideas like Mad World, Eye in the Sky, etc. We just want to have fun, hang with friends, make new friends, and create something in the end. If you are down, we would love to have you.

Taking the Sevared Blog a littler farther, I asked Barrett’s Father, Barrett, to give us a little more insight about the wizard behind the Sevared …