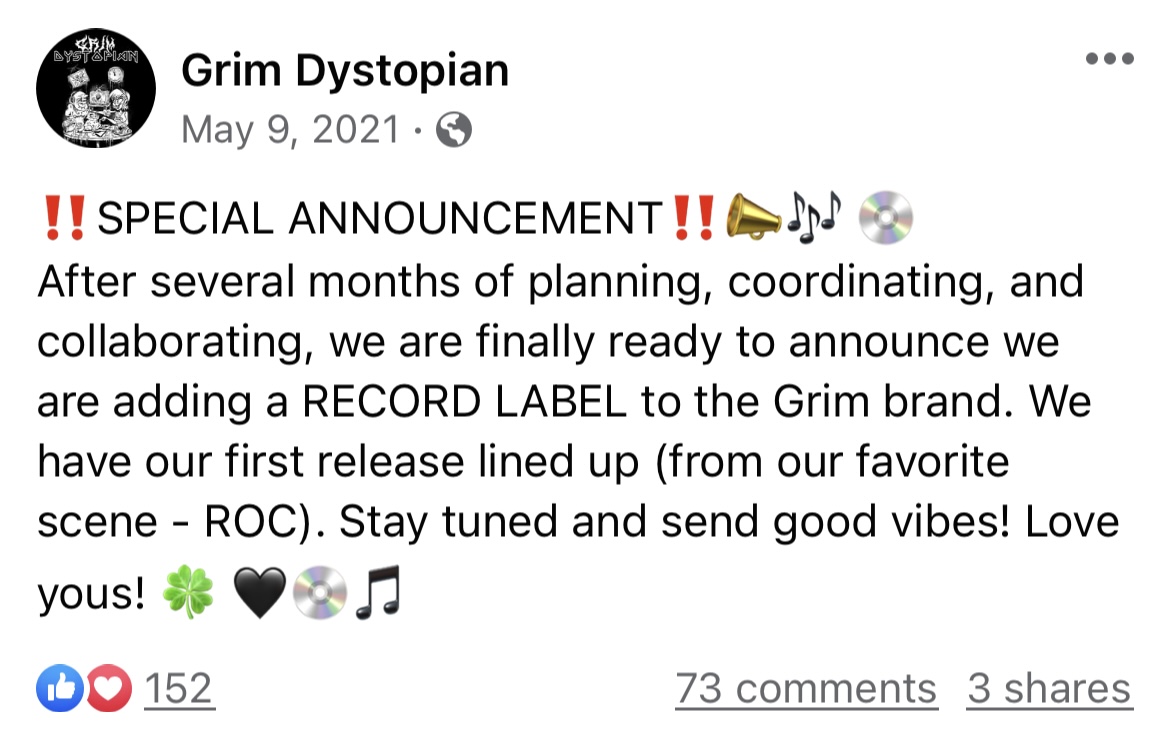 Some of you may remember when we announced (May 9, 2021, to be exact) that we were branching out and adding a record label to the Grim Dystopian brand. Here we sit, still no releases, but that is not because we did not try! It is extremely difficult to start a label amid a global pandemic, and there are more politics involved than we had anticipated…

You can imagine there was a lot happening behind the scenes far before we announced the label. If you know me, I am the biggest “girl scout” there is. We did all the right things; we applied for a DBA, we met with our tax guy, and we even met with a business lawyer to draft a legal contract to serve as an agreement between us and the bands.

Before we did all that, we had to decide why we were doing this and what would set us apart from other labels. Our idea came to us while brainstorming with the lawyer (she was cool and had great ideas). We wanted to be the label that got underground bands with a small-er-ish following recognized, in a perfect world, by a larger label (if you think about it, it is the same concept as the podcast with some strategy sprinkled in). From a financial standpoint, we were not quitting our day jobs – nor did we want to. Our goal was never anything like Nuclear Blast. Our goal was to push ourselves out of our comfort zone, continue to evolve Grim Dystopian, and do cool label shit with cool bands. The details of our contract did in fact have a lot of legal jargon to cover our asses, but to summarize, we would agree on media type (CD, Vinyl, etc.), quantity, work with a production company, cover the costs up front, and then we would split the physical copies down the middle. The band would do what they wanted (sell them, give them away, whatever) with their share, and we would do what we want with our share. We were hoping to recoup the cost of the physical media, so we were planning to have a webstore to sell our share of ‘merch’.

The lawyer requested we build a business case so she could get a better understanding of what we were after. We picked two bands for our first release(s). We agreed on a local re-issue and a compilation type thing with a band called Stench Price (Peter is the best) based (primarily) out of Siberia. Danny Lilker played on Stench Price, so there is the local tie with Siberia; I know, random.

Peter was already on board since he approached us to see if we were interested (it was right around the time we announced the label). The concept for Stench Price was a little unconventional to us just starting out, but the idea was that a couple record labels would be involved to keep costs down. At first, things were stalled due to the pandemic. Production times were over a year out and cost for materials was insane. We stayed connected with Peter for several months and when things calmed down, he put us in touch with the other labels. That is when we found out that the ‘main’ record label for this project just wanted our financial involvement, meaning there would be no mention of Grim on this release. We hand over money, we get a cut of the records to sell and end of deal. Not ideal for us just starting out and trying to expand our brand. We respectfully backed away from that scenario, which sucked because we really enjoy Peter, and we love Stench Price.

Ken and I did some digging and decided on a local re-issue we wanted to release during the same time. We reached out to one of the band members and very good friend to get their thoughts, insight, and most importantly, their support for the re-issue. Turns out, he was just as stoked as we were. I asked him to reach out to the other band member to get their buy in (to this day, I am not sure if I am happy or sad that I requested that).

Around this same time, we had the finalized copy of the label contract, so we sent it over to the two of them for review. I guess to a band just starting out, it reads like a cool deal. If you are NOT a band just starting out, and someone is looking to reissue something you did years ago before you made it in a ‘mammoth’ band, we sound like douchebags. Well, to their manager anyways. In a nutshell, the answer was no, and I was devastated. Clearly (or maybe not so clearly) our entire goal was to be the opposite of douchebags. Not to mention, we put our friend in a shitty spot. He had to deliver the bad news us; the other band member never responded to the contract email I sent. We decided against following up.

Here we are, two deals gone sideways for two completely different reasons. I started re-evaluating everything, the show, the label, and my confidence. Ken was the grim cheerleader and had to talk me into recording the show every week for about two months; my inspiration was just punched on the face.

We have not talked too much about the label since that happened. The most important thing to me, above anything else, is to remain a fan of the scene. I can see why people become jaded and untrusting; you really need thick skin and the ability to champion for your brand without letting feelings get in the way – something I clearly need to work on. We moved past it and giggle about it, but I have been very hesitant to revisit the label. We likely will at some point – we are not quitters, but we are not suckers either.

Turns out you need iron tusks to be a player in this sport. 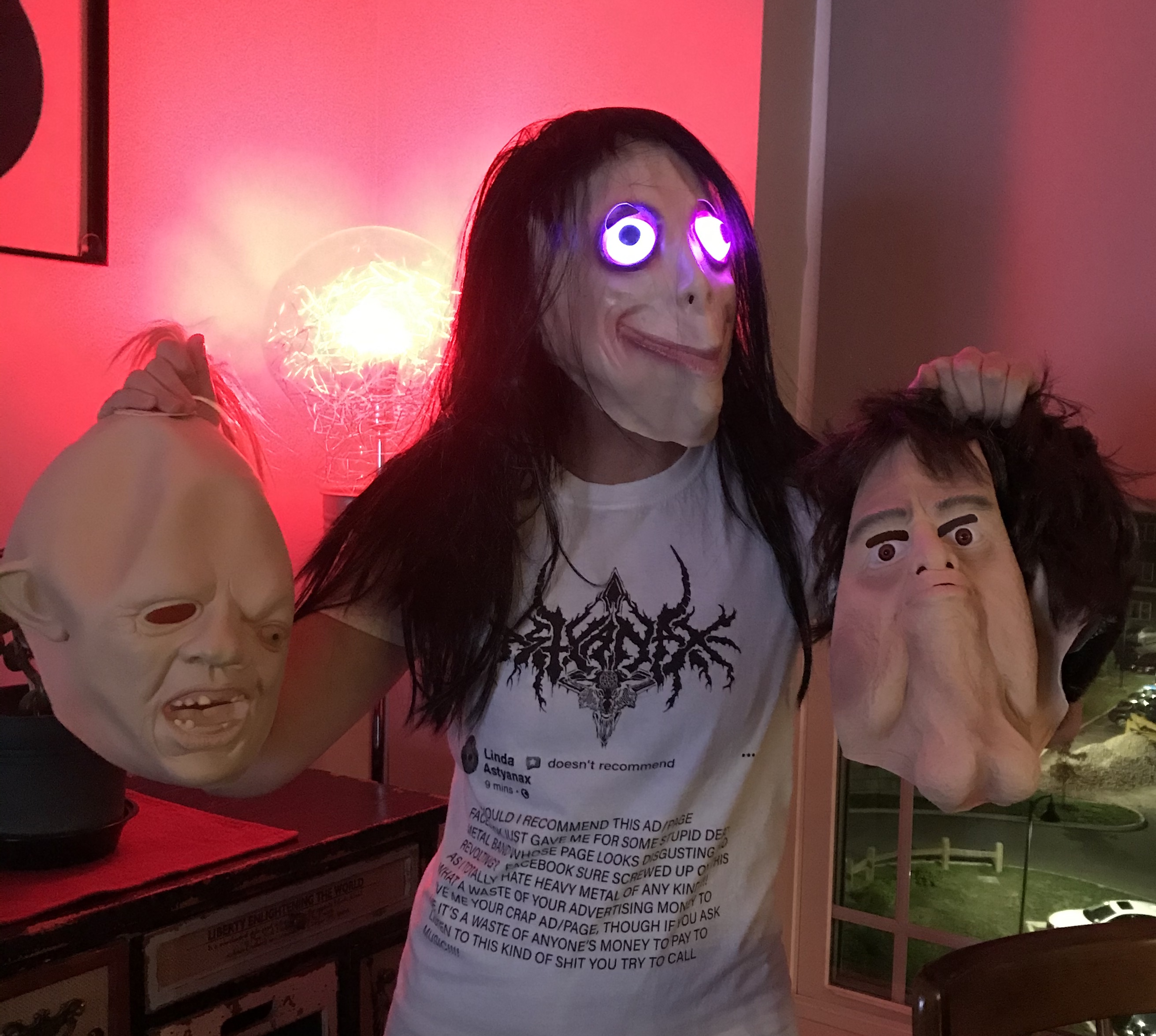