Ken and I decided against having children years ago. When we first met, we agreed to be open to the idea of having children but not force it. We both came from broken homes, we were both coming out of broken relationships, and I wanted to focus on building a solid, healthy relationship with Ken and his daughter (who I love like my own, although some would argue I do not know what love is…).

We went back and forth for years. Yes, let’s do it. Wait, we just discovered (another) good reason not to…

At one point I went off birth control. That is when Ken pulled THE card, and I thank him for it. We were laying in bed one night, and he said, “Are you sure you don’t want children just because your biological clock is telling you to?” My first reaction was to get mad, but I tried like hell not to respond.

I do not want to be lonely when Ken dies

My reasons started to slow, quickly. The mounting list of why NOT too, however, was continuing to grow.

The next day at work, I was heating up my lunch in the breakroom. It was quiet, and all the sudden I started hearing the ticking of the clock. I swear it got louder (it did not); I grabbed my food and rushed back to my office. What the fuck was that?

I found myself fixated on clocks for months after that day in the breakroom. Whether it was listening to the tick-tock or simply watching the second-hand move, I became obsessed with the idea that each tick, every time the second-hand jumped, was a second I was never going to get back.

Then it dawned on me – THAT is my biological clock fucking with me.

There are things in life that are not discussed much as we age. One of them is the idea of dwindling fertility, because, well, who would have that conversation? But it’s a thing! Something happens when you realize you are no longer viable for the job you were put here to do, biologically.

Around that same time, I was invited to a work picnic. There were about fifteen-ish people there. We hung for an acceptable amount of time and then began saying our goodbyes (you know how it goes). Last stop – the host’s wife. She was chatty, asking Ken about books, and then it came. I was blindsided with, “Are you guys going to have children?”

Ken and I just looked at each other. I am at a work function, speaking with someone I barely know, surrounded by people I would not discuss this with, and I was just trying to say good-bye!

People should not ask questions if they do not want to know the answer. I said no. I should have casually shrugged my shoulders and said maybe, but I was honest. I was berated, for about an hour, in front of my co-workers, about making the decision to not have children. Onlookers watched as this individual proceeded to tell me I would never know or feel the true meaning of love unless I have children.

Mind you, I do not even know if I can naturally have a child, and she definitely didn’t know whether or not I could have children. What if I had a medical condition? What if Ken and I had been trying for years with only failed attempts?

It all hit me on the quiet ride home. Ken was right. I wanted to want to have a baby, but only because the concept of having children is drilled into me (both biological and societal). It is outside the norm to not want children as a woman. My personal reasons for not having children far outweigh the pressures of society, and frankly, that makes a lot of people (women) uncomfortable.

Having kids is like owning a house – hang on, hang on – let me explain. Everyone who has kids asks us why we do not want kids, but then all they do is complain about them. For years, we got the famous, “Why would you rent when you can own” question. Meanwhile, the people asking were miserable being a homeowner. People just wanted to share their misery.

When people ask me that question now, I either tell them that we do not have it like that (meaning, mind your business), or make up some ridiculous story until they glaze over and stop listening.

Moral of the story: You do you, and fuck what everyone else thinks (just don’t be an asshole).

I cannot believe I still have this - but here it is! Years ago there was a filter that blended two faces together, so Ken and I took the opportunity to see what our love child would look like. I think we made a pretty sound decision -- Yikes. 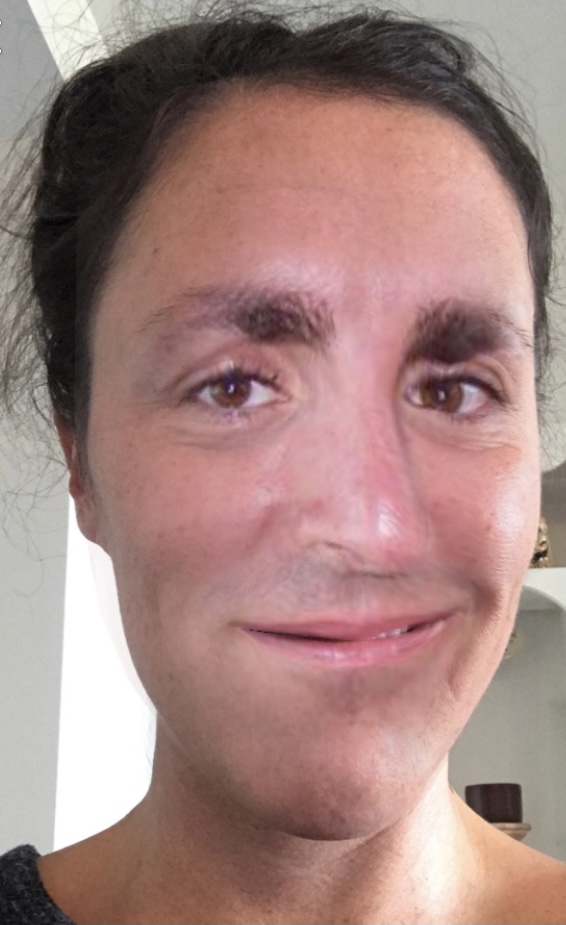