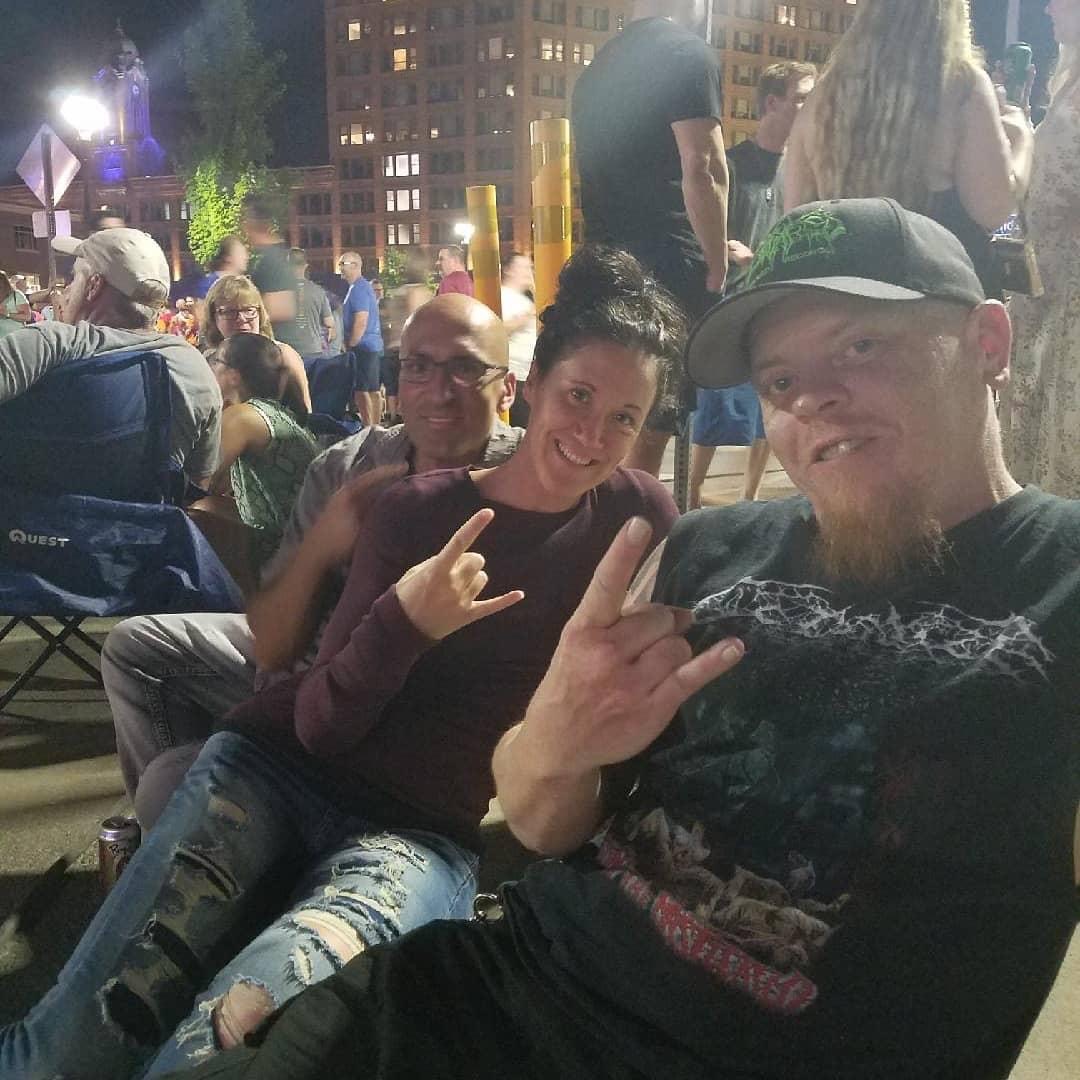 I have mentioned Barrett (Sevared Records) a couple times throughout my writings; he is part of the journey so here goes nothin’…

Aside from Kris Piper (Popper), Barrett was one of the first dudes I met ‘in the scene’. I did not say much when I first met Barrett because at the time, I felt like we had absolutely nothing in common (now the two of us do not shut up when we are together). He and Ken rambled on about this band and that band and I had no clue what the hell they were talking about. I finally got into the swing of things at Barrett’s Sevared Fest back in mid/late-2000 sometime when Neurolepsy played.

We lived out in the country, so we did not see Barrett much; truthfully, we saw him out of town more than we saw him at home (festivals). Ken always stayed in contact with him in one form or another, whether it was at a random show, buying shit from Sevared, or Venereal Messiah (Barrett, Ken, Kris, Brutal Postman/Milkman).

I remember thinking how cool it was that Barrett was able to make a living creating and running a record label, and after getting to know him more over the years, it only gets cooler to me. He talked about the start of the label when he was on the show the first time (episode 09). I still cannot believe that sixteen-year-old Kris created Barrett’s contract for the label; or maybe I can. Haha.

Barrett helped me realize how impactful Grim Dystopian could be. If you have seen Barrett around, you will notice his obvious limp, which comes from a tragic car accident back when he was a teen (on his way to band practice). He opened up on the show about what happened that day and how his entire life path changed in one split second. One minute, he was an all-star baseball player heading to band practice as a drummer, the next he was fighting for his life. He suffered several major injuries, including a crushed leg, a broken back, and nerve damage, which left him in the hospital for months. He was not supposed to be able to walk ever again, so knowing all this and seeing him out walking with his cane tugs on my heartstrings – it never gets old.

I cried on the podcast as he shared his story. Then it got even more emotional for me when I realized he shared a part of him with us, and our listeners. There were several people that have been friends with Barrett for years that have never heard the full story of his accident, and it was at that time when I realized we all have a story, and how cool it is that we get to explore the softer, lesser-known side of people. Sure, people want to hear about tours and bands and greatest moments and favorite albums, etc., but they also want to know the personal side of people; what makes them tick, why they chose the path they did, or how it was chosen for them. Barrett was on his way to becoming a baseball all-star; he would have likely gone to college on a scholarship and who knows; maybe Sevared would have never existed. Weird.

From day one, Barrett has been nothing but supportive of Grim Dystopian. He includes Grim Dystopian cards in his Sevared shipments, he introduces us to everyone and anyone, he sends band our way for airtime, he helps arrange interviews, he loves coming on the show (and he is always welcome), and he listens every single Monday at 4pm EST.

I had one of my favorite Grim memories when Barrett was on the show with Danny Nelson – vocalist of Malignancy (episode 48). I love Malignancy and I love Danny, so again I went digging stalker mode style at past Malignancy interviews to avoid asking the same boring questions. In my research, I discovered that Malignancy was originally named Carcinogen, and it was Danny’s uncle that changed the name of the band without even hearing the music. Malignancy sounded more brutal, said Uncle Malignancy. I brought that up on the show, and not only was Barrett impressed, but Danny replied with, “oooooh, someone did their homework!” I felt proud. Still do. I never want people to come on the show and feel as though we have wasted their time; I appreciate that Danny acknowledged that I put some work in.

Speaking of wasting time, funny side note regarding the Malignancy episode - behind the scenes was a complete shitshow. Danny could not hear Barrett, so we passed the mic around between us, which made editing a nightmare for Ken. On top of that, Ken’s employer was calling at the start of the interview (when we had Danny on the phone) to ask if he could travel the following day. Thank goodness Danny was patient and took it in stride and thank goodness Ken is so good at editing.

Barrett also set up the interview with Damian Leski (Gorgasm/Broken Hope) and co-hosted with us (episode 111). Barrett gave me so much shit after the interview for being so quiet and made fun of me for fan-girling. I deserved it; I was probably the quietest I have ever been on a show.

I was a little nervous to tell Barrett about the record label; I was worried he was going to take it as a ‘hold my beer’, and that could not be farther from our intention. We could not and do not want to pull off what he does. When we told him about our plan, he was ecstatic for us. He offered to help, pass along contacts, whatever we needed. Everyone needs more friends like Barrett on their side.

Those that know Barrett on a more personal level all have favorite stories to share. One of my personal favorites among many is the time we saw Barrett running (yes, running) to see Tomb Mold at MDF 2019. I still have no clue how he left us in the dust that day. I also really enjoyed the night we interviewed Malignancy. It was during a snowstorm; afterwards we just hung out and talked – but we really talked. I got to really know Barrett that night, separate from the label and his BDM persona. Then there are the stories I hear from others; the time Barrett pulled a knife on Juan, the time he unplugged IMMOLATION during their set (a couple times), the time he spilled gas all over himself on the way home from a MDF weekend and Kris had to inhale fumes the entire way home.

Aside from his gentle nature despite having the most brutal death metal label ever, one of my favorite things about Barrett is his love for his family. We almost had the pleasure of talking to Barrett’s dad on this show, but he changed his mind at the last minute because he feels he is not relevant to the scene (I tend to disagree) and does not know enough about metal. He did; however, agree to a written interview (link below). 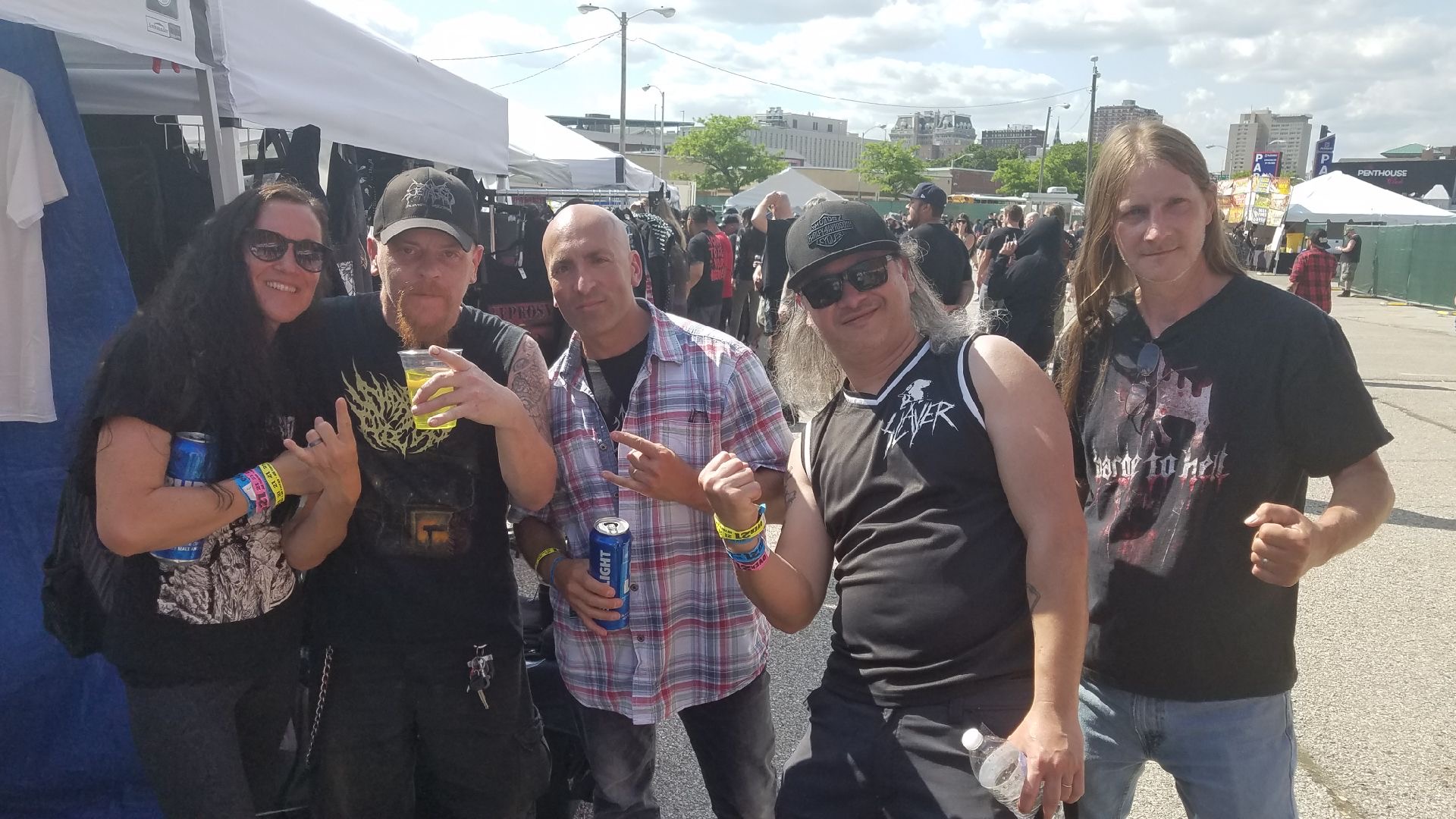 Myself, Barrett, Kenny G, Remi (thanks for pushing me out of my comfort zone, even if you didn't know it at the time), Sean. MDF 2022