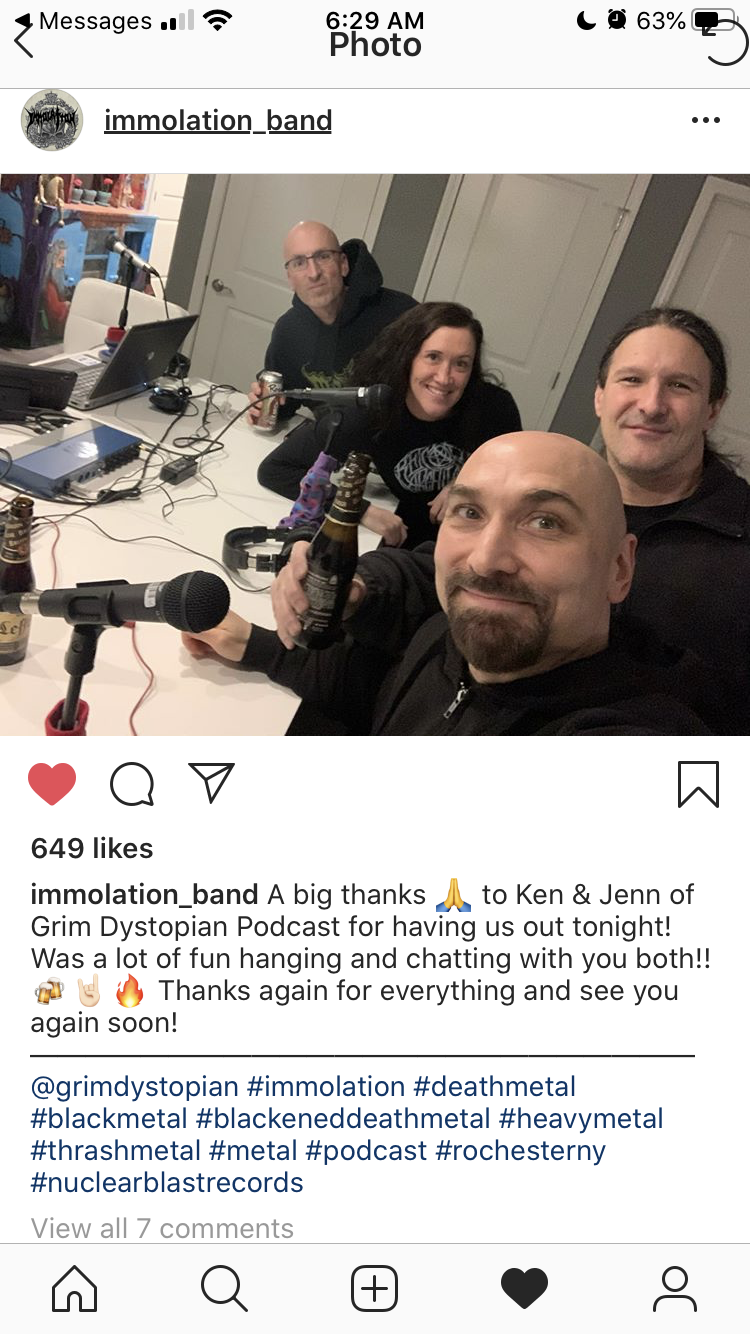 We met Ross Dolan at a Record Archive Metal Meltdown event a few years ago (pre-covid). For those not local to Western NY, The Record Archive is a great local record store that serves up a vast variety of craft brews in their backroom lounge. Metal Meltdowns happened (RIP) every second Tuesday of the month, and Mark Rapone and Seth Voorhees would spin heavy metal records while we sipped craft beer and socialized.

We obviously knew who Ross was, but he did not have a clue who Grim Dystopian was. Barrett (Sevared Records) has always been awesome about introducing us to people, and meeting Ross was no exception. It took about three months for me to work up the courage, but finally, one night at Metal Meltdown, Barrett dragged me over to Ross and introduced us. Of course, I could not contain my fangirl, but somehow managed to hold it together long enough to exchange email addresses.

The podcast was fairly new at this time, so you could imagine the hesitation we had reaching out to Ross for an interview. We were still getting our feet wet with the show, trying to figure out what worked and what did not, what we should focus on, and how we set ourselves apart from other metal podcasts. We went back and forth for weeks before finally deciding to reach out. We figured we were never going to feel prepared enough to interview the death metal legends that make up IMMOLATION.

Ross was responsive to our emails and even coordinated when Bob would be in town to meet for an interview. It is a bummer that Steve and Alex were not in town, but we were grateful to have the opportunity to sit down with Ross and Bob.

So, the date is set for an interview – MY BIRTHDAY. We did not tell the guys until long after the interview that it was my birthday to spare awkwardness, but you can imagine my sheer excitement at how I was spending the evening. They came over for the interview, which made us happy because in-person interviews have a better vibe and connection.

We usually have an ice-breaker conversation before we turn the mics on. If you have been over to the Grim homestead, you know about the ‘ridiculous playlist’. It is a playlist we have added to for years and it has every genre you could imagine and hundreds of songs. One minute we are listening to Suffocation and the next minute we are listening to The Alan Parsons Project. It is so surprising it becomes fun to anticipate the next song. So, we were chatting, listening to the ridiculous playlist, and Sinead O’Conner’s Nothing Compares 2 U starts playing. I immediately felt embarrassed (Ken started nervously giggling), but it only lasted a couple of seconds because both Ross and Bob enjoyed the song just as much as we did. We spent the next few moments quietly chatting and listening to Sinead O’Conner. On my birthday. With Ross and Bob of IMMOLATION. It reads like a dream, but it was real life. My real life.

We try to dig deep when we interview bands as to not ask the same questions and make it a snooze fest for interviewees or the listeners. Ken and I had spent hours preparing beforehand, sifting through written reviews, watching YouTube interviews, and listening to other podcasts. We weeded out duplicate questions that could be avoided (some just cannot for the sake of introductions) and felt confident with our list of questions. That was the hardest part of the interview – producing a few questions that were not previously asked, not actually interviewing them. Ross and Bob are the kindest, warmest, most sincere guys. They are completely humble, and the best part is, they are still fans of the scene. They are the cool band that walks amongst the fans, welcoming hellos and photographs.

In Lady Gaga’s documentary (this is going somewhere…) they show her getting ready to perform at the Super Bowl, and I remember her having a ‘this is it moment’ right before she went on stage. She claimed there was nowhere to go – she made it to the top, at such an early age, and she felt her career had reached its peak. Not that I am nearly as cool or talented as Lady Gaga, but during the week or so it took to edit and publish the IMMOLATION interview, I remember having a moment like hers. We just interviewed one of the most groundbreaking, iconic death metal bands ever – where the hell do we go from here? How do we top this?

When you put things in perspective, pits and peaks are kind of all made up. You need the pits to appreciate the peaks, and you need the peaks to appreciate life. Where it is all made up is when we start ranking them from smallest to biggest. We had an awesome opportunity, we seized it, we enjoyed it, we made new friends, and as sucky as they may be, we will also take the pits, to serve as reminders.

We see Ross and Bob out occasionally; we always say hello, and we attend every IMMOLATION show we can. Ross and Ken stay connected, usually about cats and cool shows to watch. I can tell you that guys of their caliber are rare and if you can say hello at a show, I encourage it. You will become a bigger fan of IMMOLATION.

IMMOLATION’s catalog is huge and extensive and all of it is great, so picking a favorite is hard, but if I had to pick, I would say Atonement (2017), followed by Kingdom of Conspiracy (2013). Favorite song? Forget about it. Also, if I can find a way to play my piano like Bob plays his guitar, I am so doing it.

IMMOLATION’s interview was published February 24, 2020 (episode 46), right before the world shut down.

Not my creation, but this is one of my favorite memes... 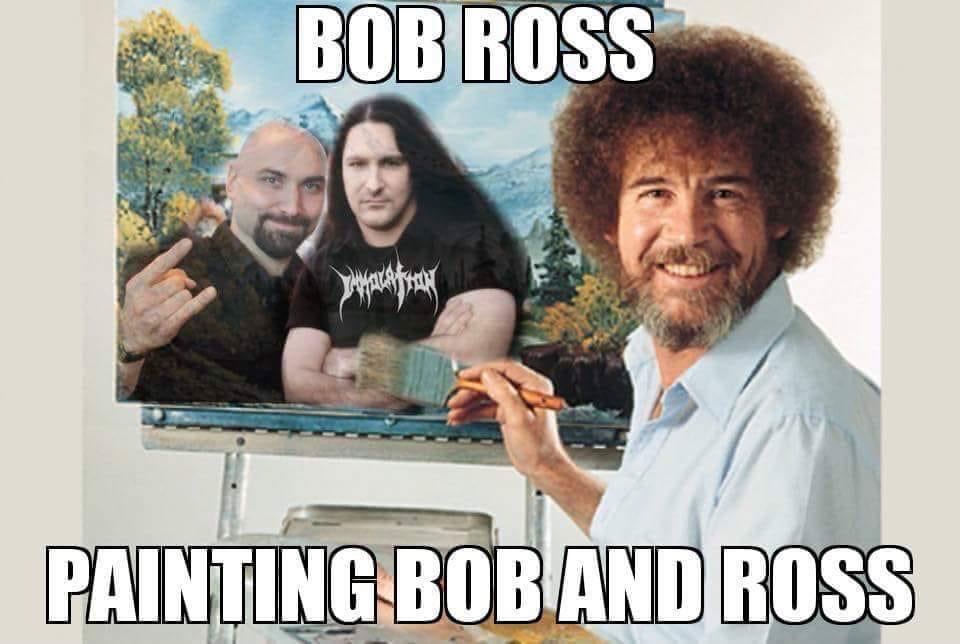